As businesses begin to re-open after months of closure, it’s important to remember that some members of the F&B industry are STILL suffering. But luckily, there is help! This week, we are thrilled to introduce you to one of BauscherHepp’s customer’s: James Beard award winner Chris Shepherd. Chef Chris is a Houston based restaurateur. You may know him from One Fifth, UB Preserv, The Hay Merchant, Georgia James, Underbelly Catering.  You may not know, that Shepherd’s Southern Smoke Foundation is offering a helping hand to F & B workers during this difficult time! 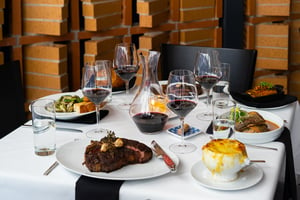 Shepherd’s Southern Smoke Foundation is a nonprofit 501c3 that has a history of helping those in need. During the Covid-19 pandemic and closures, Southern Smoke has received applications from laid off and furloughed restaurant workers across the country.

For reference, their last big relief effort was in response to Hurricane Harvey in 2017. They received 300 applications in the first month and a half after Harvey. Meanwhile, in the first month of their Covid relief program, they received over 17,000 applications for aid. Since the beginning of the outbreak, Southern Smoke has distributed more than $3.2 million to those applicants. In addition to their financial assistance, they’ve teamed up with Mental Health America of Greater Houston and the University of Houston to provide free mental healthcare to anyone in the hospitality industry and their children. So far this program exists only in Texas, because of state level licensing for mental health providers. But Southern Smoke plans to expand the program nationwide.

Chef Chris Shepherd and his team are doing a great job! If you want to learn more, you can visit their website, and if you are able, you can also lend a helping hand, by making a tax deductible contribution!